Home » Events » Christians without Borders: Toward a Trespassing Church

Christians without Borders: Toward a Trespassing Church 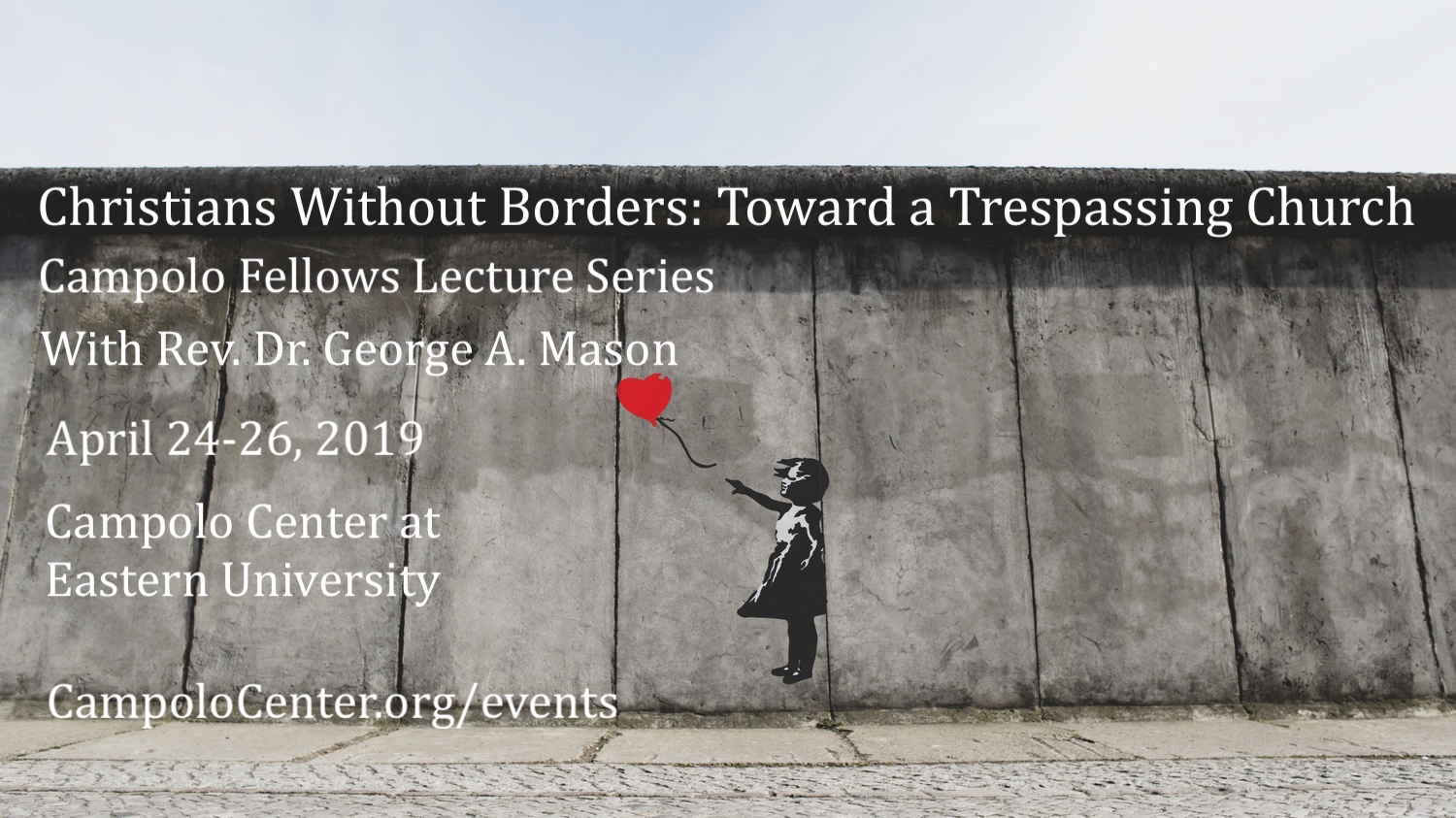 March 25, 2019 – St. Davids, PA – The Campolo Center for Ministry is pleased to announce our final Visiting Campolo Fellow of the 2018-2019 Campolo Fellows Lecture Series. The Rev. Dr. George Mason is a public theologian and senior pastor at Wilshire Baptist Church in Dallas, TX, where he has served since 1989. The full schedule of Dr Mason’s sermons and talks, including his lecture, Christians without Borders: Toward a Trespassing Church, is listed below.

The Campolo Fellows Lecture Series is generously underwritten by our friends at the Eula Mae and John Baugh Foundation. We’d love to see you there! These event are on the campus of Eastern University and Palmer Theological Seminary and open to the public. All are welcome, please direct question and RSVP to campolocenter@eastern.edu or 610-341-1715.

George is a nationally recognized leader among Baptists, serving the Cooperative Baptist Fellowship, New Baptist Covenant, Duke Divinity School, along with other local and global ecumenical and interfaith endeavors. He is a frequent op-ed contributor to the Dallas Morning News on subjects of public interest that intersect religion, such as public education, race relations and predatory lending. He writes a monthly column on public theology for the Lakewood/East Dallas and Lake Highlands editions of the community news magazine The Advocate.

His September 2018 sermon addressing the killing of Botham Jean and the problem of white churches not speaking up alongside black churches for justice, received national attention. “If we want to call ourselves by the name of Jesus, we have to stop defending things he would condemn,” Dr. Mason admonished. View a short clip of the sermon here:

At Wilshire, he founded and directs the pastoral residency program that has become a model for other congregations nationwide. His book, Preparing the Pastors We Need: Reclaiming the Congregation’s Role in Training Clergy, was published in 2012. One of his passions is encouraging those whom God has called into vocational ministry and we’re privileged to have him mentor the Campolo Scholars for three days.

George earned a bachelor of business administration degree in 1978 from the University of Miami (Florida), where he was a quarterback on the football team. He holds both the master of divinity (1982) and doctor of philosophy (1987) degrees from Southwestern Baptist Theological Seminary in Fort Worth, Texas. His doctoral field of study was systematic theology, with a minor in philosophy of religion.

10-10:50 am Eastern University Chapel – Gym (Open to the public, all are welcome) Streamed live HERE

Text and Title: Mark 8: 27-38 The Quintessence of a Christian or Why We Have To Stop Defending Things Jesus Would Condemn.

What is the mark, the essential characteristic of a follower of Jesus that makes clear that we belong to him as his disciples? Our temptation to make it into a mere confession of faith in his identity as the Christ must be tied to our willingness to join him in his suffering mission of love for the world. Jesus’ passion must be seen in our compassion. Empathy that allows us to deny self for the sake of others shows that we understand the gospel.

Guest Lecture and Discussion: God’s Freedom as Faithfulness: A Critique of Juergen Moltmann’s Social Trinitarianism and social and ecclesial implications

10-10:50 am Windows on the World Lecture – McInnis Auditorium (Open to public, all are welcome)

Title: Christians without Borders: Toward a Trespassing Church

In a time when the world lauds groups like Doctors without Borders, which goes everywhere and anywhere to bring lifesaving treatment and bear witness to human atrocities, we hear too many Christians these days defending the borders of nation-states and remaining silent about political cruelty, economic injustice and religious discrimination. Some Evangelical Christians defend the principles of the modern nation-state, along with hallmarks of it such as nationalism, militarism and capitalism, as if these carry biblical authority. The consequences in human misery are seen on the southern border of the US, the intractable stalemate in the Holy Land, and the sweatshops of southeast Asia, to name but a few. Naming idolatry is the first step in repentance, but the fruits of repentance will be seen in renewed commitment to a kind of spiritual transnationalism that at the same time honors diverse cultures and promotes full human dignity and flourishing in the name of Jesus.