A Special Feature Article about Eastern!

This article from The Christian Century featuring Tony, Eastern, and other notable alums has generated a lot of buzz recently!

The author captures the profound impact Tony has had on Christianity in general and Eastern’s students in particular. We hope you enjoy it!

The Flaherty Foundation has been one of our key partners, helping us to launch the Campolo Scholars Pilot Program. Ed Flaherty shared the following impression of Tony and the article: “I enjoyed the article and recognize the impact Tony has had, not just at Eastern, but worldwide. A true GIANT. It’s our blessing to know and work with him.”

As another academic year comes to a close, the Campolo Scholars are taking final exams this week and graduating seniors will participate in commencement ceremonies next week.

We want to highlight one of these promising, spiritually gifted, and dedicated students as they enter the next chapter of life and ministry following Jesus. 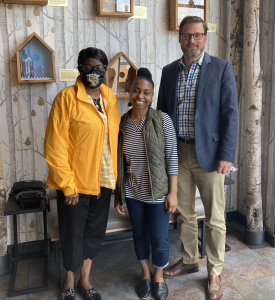 Cionie Lum is from Wilmington, Delaware and graduates with a degree in Social Work. She is called and committed to serve the church in urban ministry. Cionie and I have often discussed how Jesus was, among other things, the ultimate social worker — always seeking to humanize and care for those at the margins of society: the orphans, widows and the least of these. We’ll be sharing more about other Campolo Scholars in the coming weeks, but in the meantime, please keep all of them — those graduating and those who will return next fall — in your fervent prayers that they may finish this academic year well as they prepare themselves to be instruments of God’s love and redemptive work in the world.

Thank you for your support of the Campolo Center and also, and as The Christian Century article shows, of Tony’s legacy and public witness of faith and service. We believe it’s a fitting way to honor Tony and pass the torch to rising generations of church leaders by educating, mentoring, and equipping the Campolo Scholars.

With your support, they will be thoughtful and effective leaders within churches and communities as pastors, youth ministers, missionaries and social workers.