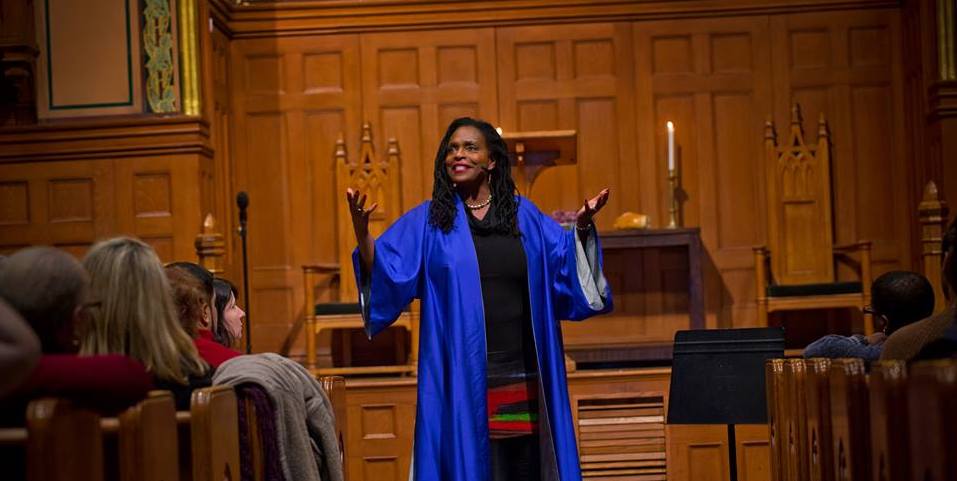 The Campolo Fellows Lecture Series continues this week, October 24-26, 2018, when Rev. Dr. Jacqui Lewis will be delivering a series of talks for the Campolo Center for Ministry, Eastern University and Palmer Theological Seminary.  During this Mission Forum week, Dr. Lewis will be discussing racial justice and reconciliation and economic justice as missional work.

On Friday, October 26th, Dr. Lewis will deliver the Windows on the World lecture, entitled The Pentecost Paradigm: What the Church Must do to Dismantle Racism.

for all of God’s children — in this socio-cultural context.  But how do churches build immunity from racial and ethnic tensions that threaten to divide rather than unite congregations? Jacqui Lewis will share practical strategies to develop multiracial, multicultural communities of faith based on her research, experience and leadership with The Middle Project and as Senior Pastor at Middle Collegiate Church, a vibrant, multiracial, welcoming, and inclusive congregation in New York City. We invite you to join us or tune in via live stream for the public events:

Friday, October 26
Window on the World at 10 AM: The Pentecost Paradigm: What the Church Must do to Dismantle Racism
Luncheon and Q&A at 11:30 AM
Honors Forum at 3 PM

For questions about the Campolo Fellows Lecture Series, please contact the Campolo Center at CampoloCenter@eastern.edu or 610-341-1715.

When she was eight years old, Jacqui Lewis hid under her bed as bullets flew in her Chicago neighborhood following the assassination of The Rev. Dr. Martin Luther King, Jr. In that moment, she felt called to work for racial equality in the United States.

It has been said that her 1,000-member congregation, Middle Collegiate Church in New York City, has diversity that looks like the subway, but its legendary love feels like home. Jews, Buddhists, atheists, and Christians pack its sanctuary to standing-room-only capacity. Millennials and boomers, trans and gay, singles and families all call Middle their own. Middle Church is celebrated in Robert P. Jones’ book, The End of White Christian America, as an example of what revolutionary love can do to combat racism and xenophobia.

Dr. Lewis hosted “Just Faith,” an on-demand television program on MSNBC.com and is a frequent media commentator. Her books include The Power of Stories: A Guide for Leaders in Multi-racial, Multi-cultural Congregations, The Pentecost Paradigm: Ten Strategies for Becoming a Multiracial Congregation, and the children’s book, You Are So Wonderful! Dr. Lewis is an Auburn Senior Fellow and is currently at work on a book about a path to revolutionary love.