One of Tony’s most important and favorite uses of his time these days is counseling and mentoring the Campolo Scholars.

Mike Gankevich is one of the Campolo Scholars studying at Eastern’s Palmer Theological Seminary. He recently spent the afternoon with Tony and I was privileged to listen to their conversation.

Mike is enlisted with the National Guard and works full time as an officer at a federal prison in Philadelphia.

He has answered a call to serve as a chaplain in the military or prison and to serve as a volunteer pastor in a local church. It’s Mike’s hope and prayer that he’ll be accepted into the military’s Chaplain Candidacy Program this fall. In addition to his theological studies and day job, Mike serves with two churches, leading a Bible study with youth at Grace Ukrainian Baptist Church and co-leading Wednesday evening worship at True Vine Church Community.

Mike sees his mission as two-fold: First, to minister to prisoners and those in the National Guard. And secondly, to bear witness to his colleagues of the humanity and vulnerability of the downtrodden caught in the justice system. 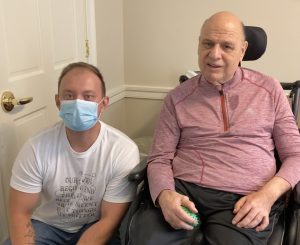 It was fascinating to learn about the interests and experiences that Tony and Mike share in common. For example, when Tony was Mike’s age he considered serving as a chaplain in the military and thinks it’s a good and important way to serve to Lord. Since they each are leading Bible studies, they discussed the various Biblical commentaries they consult to prepare for teaching — Tony recommends William Barclay’s comprehensive New Testament commentaries.

For two hours they discussed all manner of topics: the challenge of obeying the Christian dictate to love one’s enemy while serving in the military; the significance and limits of tithing; the efficacy and witness of Christ-inspired, student-led activism; and the importance of the Church understanding and subjecting the “principalities and powers” to the Lordship of Christ.

These conversations with Tony are invaluable, formational and unforgettable for each of the Campolo Scholars.

I cherish these moments too and am reminded of what a treasure Tony is to the Church — thanks be to God! And thank you for making it possible for the Campolo Scholars to learn and grow at Eastern and Palmer and to glean wisdom and guidance from Tony.