A Visit From a Revolutionary Lover – Rev. Dr. Jacqui Lewis 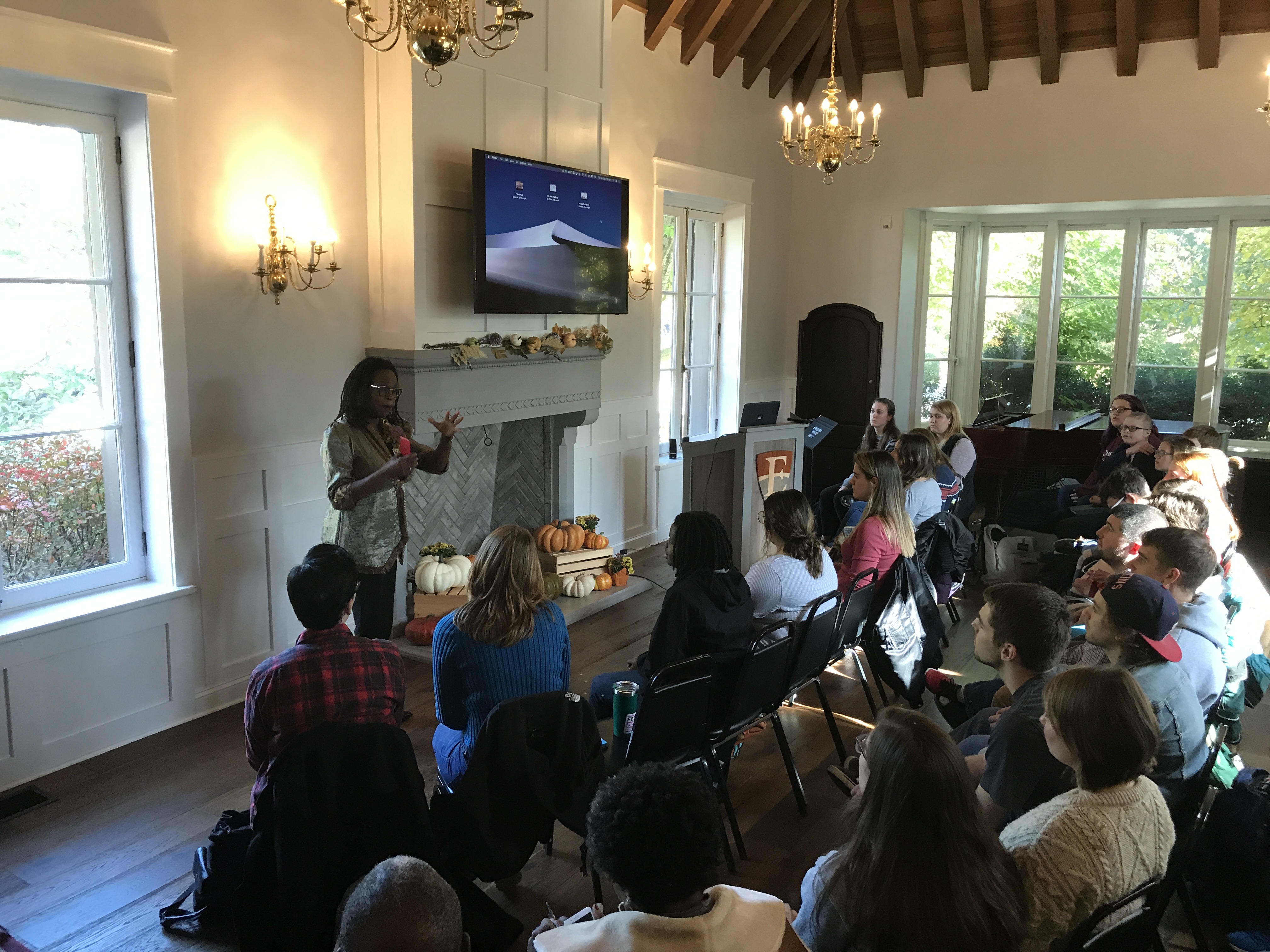 After a busy few days with Rev. Dr. Jacqui Lewis, the Eastern Community and Campolo Scholars remain challenged and changed by her words. Here is a reflection from  James Williams, a third year seminarian and Campolo Scholar who was blessed along with many other by Rev. Dr. Lewis.

Pastor. Educator. Activist. Prophet. Controversial. These are a smattering of the words that I have heard used to describe Rev. Dr. Jacqui Lewis during her weeks stay at Eastern University as part of the Campolo Center for Ministry’s Speaker Series. Dr. Lewis spoke in Chapel, visited classrooms, led Palmer Theological Seminary’s “Chapel and Chew” reflection, presented at Eastern’s “Windows on the World” and the Honors College Forum and met with numerous students and off-campus guests during informal meals and conversations throughout her three day visit. Not only a pastor, but a fierce advocate for social and economic justice, racial equality, and LGBT+ rights, Jacqui is heralded nationwide as a passionate voice for inclusivity in the church.

Rev. Dr. Jacqui Lewis delivering her lecture “The Pentecost Paradigm: What the Church Must do to Dismantle Racism” at the Windows on the World.

This inclusivity—which Dr. Lewis sees as a natural result of practicing “Revolutionary Love”—has enabled her to shepherd one of the most diverse, multiracial, multicultural churches in the country. It was the development of this eclectic congregation at Middle Collegiate Church in New York City that was the focus of her lectures at Eastern.

I have talked to several members of the Eastern community about Rev. Dr. Jacqui Lewis. And while everyone seems to have an opinion, none form a consensus. Some see her as the brave barer of social justice, unafraid to challenge the traditional status quo of biblical interpretation and the cultural baggage that accompanies it. To others, Dr. Lewis is a haphazard liberal who pushes her ideologies too far in her promulgation of the Gospel. One administrator offered his complaints to me about how uncomfortable she made the community; another student rejoiced in how uncomfortable she made the community! Speaking at Eastern’s Wednesday Chapel Service, Rev. Dr. Lewis confronted Jesus’s encounter with the Syro-Phoenician woman; particularly, she dwelled upon the potentiality of his “mistake”; could culture have gotten ahold of the very divine—yet very human—Jesus? While this kind of thinking is not new to the theological arena, it was apparently very new to many on Eastern’s campus.

The impact of Rev. Dr. Lewis’ visit cannot be understated. Many classes took a break from their predetermined curriculum to explore the ideas presented by Jacqui (as she likes to be called). Indeed, she has gotten students dialoguing rigorously about theological quandaries, social movements, and the place of Christianity in a post-modern society. More than any other speaker in recent memory, Dr. Lewis has stimulated vibrant conversation around controversial issues. Importantly, it’s this kind of scholastic and spiritual wrestling that compliments the mission of the Campolo Center to cultivate mature Christian leaders and prepare them for the challenges facing church renewal in the 21st century.

In this writer’s opinion, we cannot be afraid to ask tough questions; if we don’t ask these questions, we should have no doubt that others in our ministries will. Beyond that, it’s in this deep probing that we can begin to discern more of God’s nature, and perhaps learn more about God’s greatness: “Theological formation is the gradual and often painful discovery of God’s incomprehensibility. You can be competent in many things, but you cannot be competent in God” (Henri Nouwen). There is little doubt that Rev. Dr. Lewis has left an indelible mark on the Eastern community. She has caused us to delve more into the mystery of God, to explore the possibilities and implications of achieving a multiracial, multicultural church, to hear more attentively the liberating call of Jesus Christ to the oppressed and the marginalized, and has challenged us to love in a revolutionary way. Pastor. Educator. Activist. Prophet. Controversial. These are all the words that I’ve heard used to describe Rev. Dr. Jacqui Lewis – these are also words that I’ve heard used to describe my Savior.